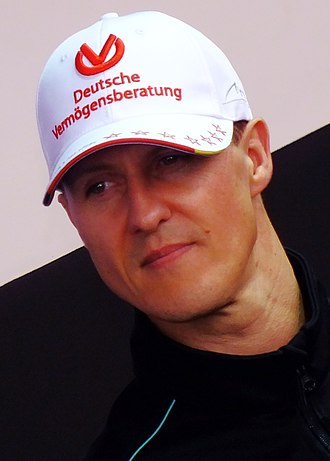 The seven times World Champion driver arrived at the Georges Pompidou Hospital in the French capital on Monday afternoon, and was welcomed by Professor Philippe Menasche.

The stem cell treatment will be used as part of of the racing ace’s ongoing care related to the horrific head injuries he suffered in a skiing accident almost six years ago.

The legend turned 50 on January 3, but has not been seen in public since the accident.

Schumacher was taken to the Pompidou hospital in southwest Paris, where he was welcomed by the expert, Le Parisien reported.

Prof Menasche, 69, is best known for performing the world’s first embryonic cell transplant on a patient with heart failure in 2014.

The French newspaper said the former champion would undergo treatment based on stem-cell transfusion by the French surgeon.

Now, it is hoped that he may be able to further Schumacher’s recovery with his pioneering work.

Le Parisien newspaper reported: “It was at 3.40 pm on Monday that a stretcher arrived on the first floor of Georges Pompidou European Hospital.”

It added that while he had initially been due to receive the treatment last July, “an unexpected health problem prevented this”.

INFUSION OF STEM CELLS
Schumacher was transported to hospital in a blue and yellow ambulance registered in Geneva.

A blue cloth “completely covered his body and face” as he was taken into the continuous monitoring unit of the Cardiovascular Surgery Department.

He had a security contingent “of about ten people,” the news outlet reported, adding that Prof Menasche was “in charge of the group”.

Le Parisien said that “according to our information”, the F1 ace could benefit from “infusions of stem cells that are distributed in the body to obtain a systemic anti-inflammatory action throughout the body”.

The treatment should start as early as this morning, with Schumacher reportedly expected to return home on Wednesday.

According to other sources, the champ made at least two visits to the Pompidou hospital earlier this year.

On both occasions, he arrived by helicopter from Switzerland and landed at a heliport in Issy-les-Moulineaux, near Paris.

During his first stay in the capital, Schumacher underwent tests at Pitié-Salpêtrière Hospital, but key work by the professor was postponed until today.

PARALYSED
The seven time F1 champion suffered severe head injuries on a family skiing holiday in the French Alps on December 29 2013, and has not been seen in public since.

Schumacher was skiing with his son Mick when he fell and cracked his head on a boulder on the Combe de Saulire above Méribel.

The devastating injury left him paralysed and unable to speak.

Schumacher spent three months in a medically-induced coma after the accident and has had years of intensive care at his house in Gland, a Swiss town on the shore of Lake Geneva.

His condition now appears to have stabilised and in January this year he was taken by helicopter to the family’s holiday home in Mallorca for his 50th birthday.

A spokeswoman for Schumacher did not immediately return a request for comment.

What is stem cell therapy and how does it work?
STEM cell therapy is one of the most promising new medical treatments.Stem cells are the body’s raw materials – the cells from which all cells in the body are generated.In the lab, scientists can take stem cells and help them divide to create daughter cells.These daughter cells can either become new stem cells or turn into specialised cells – blood, brain, heart muscle, bone cells for example.Scientists and doctors across the world hope stem cells could prove the breakthrough for treating a range of conditions, from heart disease to cancer.How does it work?One of the key ways stem cell treatment can work is to repair or regenerate damaged and diseased tissues.By taking the cells and creating specialised heart muscle cells for example, doctors can help repair damaged heart muscle and use them to treat heart failure.Who can benefit?According to the Mayo Clinic in the US, patients with a wide range of illnesses and disease could benefit from the treatment.They include those suffering:
spinal cord injuries
type 1 diabetes
Parkinson’s
Alzheimer’s disease
heart disease
stroke
burns
cancer
osteoarthritis
Stem cells can also be used to grow new tissue that can then be used for transplants and regenerative medicine.It means in future, stem cells could be used to grow new organs rather than relying on organ donation.

Stem Cells Treatment for multiple sclerosis (MS).   Interim results from an international trial of a stem cell transplant treatment showed a much higher success rate than the control group, which received a drug Read more…